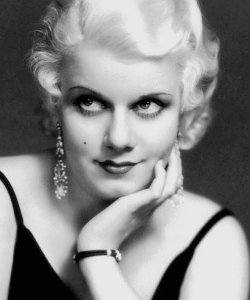 Long before Marilyn Monroe, Jayne Mansfield or Raquel Welch graced the silver screen, there was Jean Harlow, and only Jean Harlow. Officially, the first blonde bombshell of the silver screen and sex symbol of the 30’s, she was discovered by the legendary aviator turned director, Howard Hughes.

Born  Harlean Harlow Carpenter on 3 March 1911 in Kansas City, Missouri, as the only child of a dentist and his wife. Her mother called her ‘Baby’ and was so possessive in later life Jean related she didn’t even know her name was Harlean until she started school. As her parent’s marriage faltered and failed, her mother clutched ‘Baby’ even closer until Jean married and her husband moved her to Beverly Hills, California in 1928 basically to separate her from her clinging mother. The mother followed, and the couple divorced the following year.

Either the stars aligned or the moon moved to the seventh house, because Jean crossed paths with Howard Hughes, and Jean Harlow the socialite became Jean Harlow the star of Hughes first film, ‘Hell’s Angels’, released in 1930. To capitalize on her hair color, Hughes renamed another movie he was working on, and she became the star of  ‘Platinum Blonde’. When female fans begin dying their hair to match hers, Hughes organized a series of ‘Platinum Blonde’ events with a prize of $10,000 to any beautician who could match Harlow’s hair shade; an impossible task as Harlow’s look was achieved through weekly applications of ammonia, Clorox bleach, and Lux soap flakes.

The stars once again shifted for Jean, and on her  21st birthday Hughes sold her contract to MGM for $30,000 at the height of her popularity. Jean Harlow had to have been born under an unlucky star, because while filming ‘Saratoga’ with Clark Gable she was struck down by a mystery illness that lingered. There appeared to be no cure for what ailed Jean, and for Jean Harlow there was no happy ending. Originally diagnosed as flu complicated by an inflamed gall bladder, a second opinion revealed she was in the later stages of kidney failure. Little was known about kidney disease in the 30’s, and there was much speculation about Jean’s condition being related to her hair applications.

On 6 June 1937, Jean was taken to  Good Samaritan Hospital in Los Angeles where her mother barricaded the door, and repelled all visitors except doctors. She slipped into a coma, and died the next morning at age 26. She was interred at Forest Lawn Memorial Park in Glendale in the Great Mausoleum under the name Jean Harlow; however, the faceplate on her crypt bears the simple inscription, ‘Our Baby’. Her mother was laid to rest beside her in 1958. Due to public outcry, Saratoga was finished with three doubles instead of replacing Harlow. Originally scheduled to be released in 1937, Saratoga was released two months after Harlow’s death.

For whatever reason, the 40’s ushered in the brunettes; Joan Crawford, Linda Darnell, Lauren Bacall, Jean Tierney, Vivian Leigh, Olivia de Havillan, Judy Garland, and so many more, but Jean Harlow’s star is secure. She was and is the first blonde bombshell of the silver screen. Actually, the silver screen may never see the ‘Harlow’ look again, if hair treatments made of bleach, ammonia, and soap flakes are required, but she was the ‘Baby’, and what a babe she was.